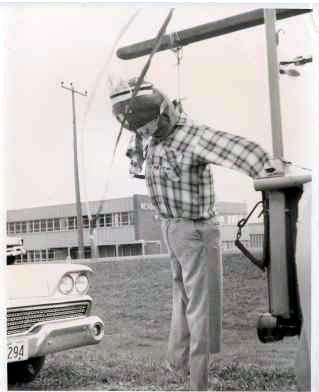 This is the effigy of Foster Russell, the publisher and editor of the Cobourg Sentinel Star back in the early 60's. He was critical of the union that was on strike at Nicholson File, and everyone knows that unions, like Mohammed, are NOT to be criticized in any manner.

Strikers drove this effigy throughout the streets of Port Hope. The newspaper suffered broken windows one night and union goons or collaborators smashed the windows in his home another night. Yet he continued writing editorials against the union. For his efforts. he was the first and only Canadian to win the Parrish Lovejoy award for Courage in Journalism.

Courageous publishers and editors like this are a thing of the past. How sad.
Posted by Wally Keeler at 9:34 AM No comments:

Wally Keeler reads The Politics of Spring, at the sunrise ceremony for Earth Day, held at Cobourg Ecology Garden.
Posted by Wally Keeler at 9:31 AM No comments: