Raise the Stanza of Living

On Labour Day weekend in 1969, some young people took to downtown Cobourg with brushes in hand to paint the downtown, literally. It was called a Paint-In. Retail stores offered up their windows for a week to be painted by local artists. Only water-colours could be used. The Sept 3 issue of Cobourg Sentinel Star did a big front-page-above-the-fold spread on the Paint-In.

There are too many empty retail outlets downtown with store windows looking more like sore windows. Here’s the pitch.

Cobourg is chock-a-block with poets. They could fill the emptiness of windows with literary substance. One poem per window. The Cobourg Poetry Workshop is a gathering pot of poets, emerging poets, and poetry lovers who could easily fill the windows with their inspiration.

Surely the town could provide the paper and print one poem from each of Cobourg’s three Poet Laureates. The current Poet Laureate could vet the submitted poems from others.

There must be some aspiring poets in our three high schools who would like to display their highly refined literacy.

Don’t take my word for it, take theirs and celebrate it. Fill empty windows with eloquent intelligence. Spread the word. Bring poetry out of the better poems and gardens salons and take it to the streets.

Poetry all too often lies like a cadaver collecting dust on library shelves. Take it to the streets. Poetry for pedestrians.

Posted by Wally Keeler at 7:31 AM No comments: 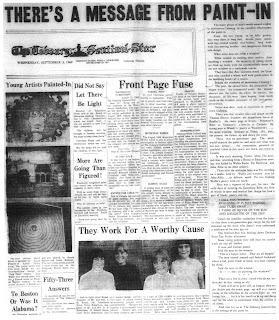 THERE’S A MESSAGE FROM PAINT-IN
Cobourg Sentinel-Star, September 3, 1969
The many phases of man’s world seemed evident in downtown Cobourg in the youthful effervescence of the paint-in.
From the very young to the fully grown, they were there in long hair, beards, jeans, minis, with legs twined around step-ladders, long arms with free-moving brushes and imagination flowing into design.
What artist does not relish a window?
While vandals see nothing more creative than smashing a window, the majority of young minds are fired up inside with the incontrollable desire to use any window as a ready-made canvas.
They have that Alec Guinness mood, the Guinness who attacked a whole wall with garish colours in the headlong frenzy of a creator.
Behold the windows of downtown Cobourg!
The poet, the animal lover, the romanticist, the slogan writer, the commercial artist, the dreamy abstract one, the realist, the schizo, the funster; the characters of life were there leaping from inside youth to the window caricature of self and society everywhere.
Never was there such an exposition in downtown Cobourg.
There was that Royalist colour and design on the Thomas Electric window, the magnificent horses at Bradley’s. the comics page at Evan’s, Rosemary’s Baby at Stedman’s, a love-in at Cortesis’, the strong man at Woody’s; poetry at Woolworth’s … the prize-winning intricacy at Tom’s. the past, the present, the future, up and down the street.
There was no generation gap. The adult world enjoyed the paint-in and some saw what was not seen before … the tremendous potential of youthful talent in this town, out town, any town in Canada.
It was early morning, Friday, when the Sentinel-Star [Foster Meharry Russell] returning from a Boards of Education meeting, was hailed by Wally Keeler, Kathryn McGlynn and John Allan to see their artistry.
Here was a vignette of the past, for since the early days of printing the Gutenberg Bible, the flow of words in essay and musical line, design has been a part of books, poetry and life.

Comes the indelible realization from the paint-in that there is not generation gap, except for the odd character on the street who doesn’t even understand a modicum of his own era.
The Sentinel Star was looking down Division Street late Friday afternoon.
Some young people were still busy on creative work on and off ladders.
A man and woman passed.
“This is a hippie town. They are all hippies.”
The man turned around and looked backward where a lad, paint brush in hand, was busy creating his thing. Said the man to the woman;
“Je ___ ___, they are painting the windows!”

There are a few in every crowd who do not understand, be they young or old.
Youth will never grow old, so long as they enjoy Archie and the comic page, age will ever remain young in the reflection of the creative light on the young face … for it is for youth to be up and doing and the adult to understand what the activity is all about.
And that for us at The Cobourg Sentinel-Star is the message of the paint-in.
Posted by Wally Keeler at 6:22 AM No comments:

Retired Catholic elementary school teacher, Jack Vollering, charged with sexual interference with a minor and sexual assault, was not in court for the scheduled pre-trial hearing on January 16. His lawyer, Taylor Smith, appeared in his stead, saying to the judge, "I would like to submit a designation why Jack Vollering is not in court today." Paper documents were handed to the Judge who moved the pre-trial forward to February 10, 2012.

Jack Vollering was a Catholic elementary school teacher in Grafton, Port Hope and Cobourg. Jack Vollering was well-respected in the local Catholic Community, especially the Knights of Columbus, where he rose to 'Faithful Navigator' in the Port Hope Council #6490 from 2008-2010, and last year was designated as Grand Knight. A 'Faithful Navigator' is the highest standing in the Fourth Degree Assemblies.

The local Knights of Columbus website asserts. "The Knights of Columbus is a Catholic fraternal order dedicated to the ideals of Columbianism: Charity, Unity, Fraternity, and Patriotism. We serve our fellow Knights, families, Parish, Church, Schools, and the community"

Will Jack Vollering be going to Mexico Jan 16?

Many residents of Cobourg are curious if Jack Vollering will make an appearance at his pre-trial hearing scheduled for Monday, January 16.

January 16 is also significant because it is the date that his son, Paul Vollering, will marry Dawn King in sunny and warm Mexico. The wedding had been in the planning stages for months.

Jack Vollering, 65, a retired elementary school teacher has been charged with sexual assault and sexual interference of a minor. Vollering had taught at the Catholic elementary schools in Grafton, Port Hope and Cobourg.
Posted by Wally Keeler at 2:15 PM No comments:

Posted by Wally Keeler at 12:36 PM No comments:

Cobourg Poet Laureate, Ted Amsden, opens the new year with eloquence: "there were hills of coal at Cobourg's waterfront where children bike mounted, black faced, and day crazy challenged each other to greater heights," "stacking up moments of joy like cord wood," "our pact with the waterfront is as ancient as village life," "is visiting the beach and being toasted by the sun a suitable burnt offering?" "celebrate loudly this beachy keen delight we call Cobourg's harbour"
Posted by Wally Keeler at 7:07 PM No comments: