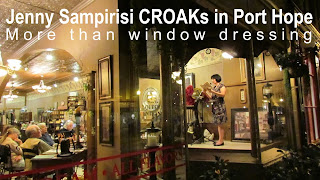 Jenny Sampirisi croaked at Dreamer’s Café in Port Hope last September 26. Jenny was launching her first book of poetry, CROAK, published by Coach House Books. Formerly held at Farzinis, this poetry outreach program of poet James Pickersgill, made its debut appearance at Dreamer’s Café, just as Jenny’s first collection of poetry made its debut appearance at this wonderful venue.

Jenny took a few moments out of her hectic book-mongering schedule to take the oath of allegiance to Poetry.

On the same bill, Bob MacKenzie, of the Kingston area poetry cartel, brought his special grounded poetry. Explore his website, and you will see that Bob’s earthy eloquence is prolific. He also took a few moments to take the oath of allegiance to Poetry.

Posted by Wally Keeler at 2:16 PM No comments:

It was stanza room only in the Cobourg Council Chambers, October 3, when units of verse of the universe, the better poems and gardens set, the poetariet, and other elements of poetry circles and triangles, gathered to bear witness to the decree that Ted Amsden will be Cobourg's third Poet Laureate.

The Cobourg Poetry Workshop has posted a splendid interview of Ted here. Also the same page has a link to Ted's acceptance speech in ascii -- it is worth the read.

It is also worth a listen. After all, it did receive a stanza ovation.

Posted by Wally Keeler at 7:15 AM No comments:

BARD TO THE BONE 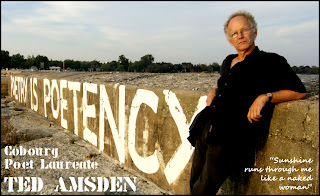 In Pierre Elliott Trudeau, Canada has at last produced a political leader worthy of assassination.

In Ted Amsden, Cobourg has, at last, produced a poetical leader with a poem-grown Canadian voice worthy of inspiration. Canada long ago evolved and shucked its colonial constraints; likewise, Ted Amsden has now shucked the classic stuffiness of the better poems and garden set.

I can hear units of verse throughout the Universe applauding the appointment.

Bard to the bone, Ted Amsden is a word warrior wunderbard who will beat back the sub-verse activities of the Blandinistas (aka mediocrity mafia) of Blandland. The 101st Textual Assault Group of the Creative Intelligence Agency, armed with the latest surface-to-sentence similes awaits his poetically correct inspirations.

On behalf of the poetariet of the Imagine Nation of the Peoples Republic of Poetry, I congratulate Ted Amsden for his official appointment and we look forward to his ++expansionist activities on behalf of our poem and native land, the United Imagine Nations.

May he continue to practice unsafe text without a net.

Peoples Republic of Poetry
Posted by Wally Keeler at 6:52 AM No comments:

Russell Lake has been a committee member of the Cobourg Ecology Garden since its inception 15 years ago. The event was part of the 15th anniversary of the founding of the Garden by Minnie Pennell. The event was September 24, 2011.

Posted by Wally Keeler at 1:34 PM No comments: 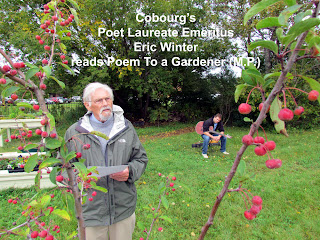 I doubt if you noticed the crow that was there on that day
the one with a faraway look in his eye
thin, with a hump back, pecking away
poking at mud,
making a couple of flaps with a cry
pretending indifference as any crow should.

You did not know then you’d soon be taken with Rue,
Fever Few, Lungswort and Leprachaun’s Gold,
Too taken up with the plain buttercup
with Fleebane and Woodruff, Bloodroot and flax,
and all of your flora.
In brief, you were a bit lax
when it came to observing that black bit of fauna
still keeping an eye out, nosing around
and pecking away in the corner.

Now apples are ripe and ready for plucking
sunflower all blackened.
Rudbekia gone and gone Coreopsis,
Stacis Byzantia, gone is the Primula
and only Chrysanthemum stays. How summer flies!
Now here’s a surprise
It was me, me wearing my Halloween disguise,
I was that crow with the hump and the shifty,
faraway, look in his eyes.
And I saw it all.

It’s too much on my conscience for me to stay mute
I know what went on with that bearer of fruit,
stinking of cow muck.

Say what you will - the mythology pardon
I’ll tell them to look by the lake.
The consequence there!
They can see for themselves -
the little one there called Ecology Garden
I know what you did.
I know what it was went on there
I’ll let the town know.
Watch out now.
You’d better beware.
For I’m going to tell.
I’m going to tell on you
Minnie Pennell.
Posted by Wally Keeler at 1:00 PM No comments: