Cobourg Legion On the March 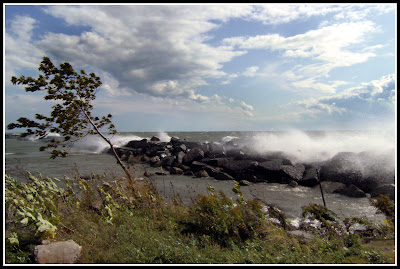 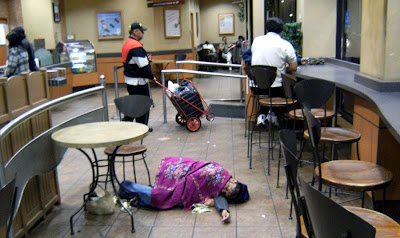 So it's Saturday in Big Smoke. I walk towards home after submerging myself in a 40 minute speech from Ezra Levant. He had been addressing Federal and Ontario Libertarian members. It's late, and a coffee seemed appropoetic to assist in some post-midnight Photoshopping, so I open the door and lo & behold ... "I'll have a large with one milk, thank you."
Posted by Wally Keeler at 2:26 PM 1 comment: 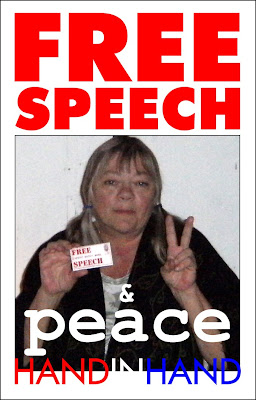 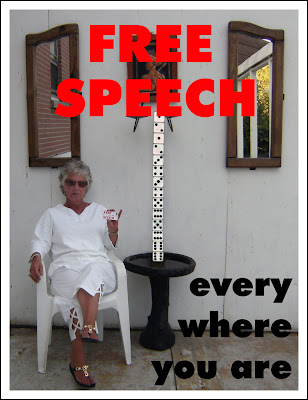 Posted by Wally Keeler at 9:25 AM No comments:

Poets Head to the Garrets 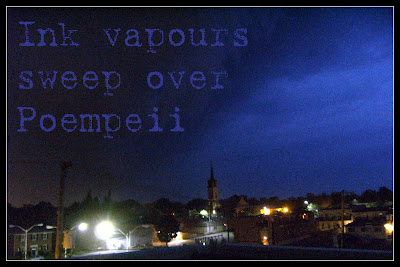 Posted by Wally Keeler at 6:46 PM No comments: 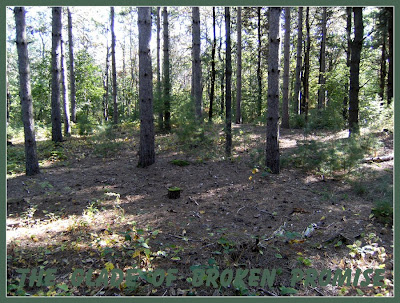 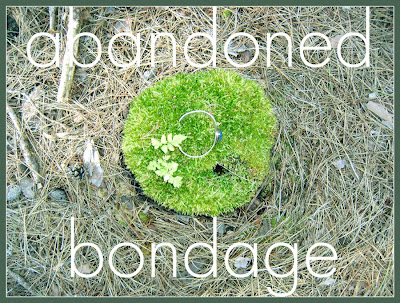 Once upon a time (early 60's) at UCLA, a large portion of the student body affiliated with left-leaning politics went on a march to advocate FREE SPEECH. Many documents and photographs can be found at the Free Speech Movement Archives.

But that was the early 60's, when leftists rose up to throw off the repression of The Establishment, to liberate the literary and artistic imagination from oppression, from the general zeigeist to the residual attitudes of the House Committee on Unamerican Activities. "FUCK OFF" became a profound political statement. No longer would great literary talents such as Norman Mailer be compelled to write war novels using the weasel word FUG. Real soldiers say that?

Sadly, the enlightened left who broke down many barriers of censorshit, have morphed over recent decades to become the body that now enforces consorshit via the campaigns of political correctmess, especially establishing Human Rights Tribunals to enforce that censorshit. Nowadays, the FREE SPEECH movement has been appropriated by the right-wing. It doesn't have to be this way. FREE SPEECH belongs to every human being on this planet, right, left, centre, far out, commie, nazi, socialist, capitalist, etc. etc.

The pressure against FREE SPEECH serves no purpose other than to weaken the fabric of our culture and our future. But there is hope. A group of NDPers have mercilessly realized the threat that the Human Rights Commissions have in Canadian Society and wrote their first screed against that threat:

"That said I would like to draw your attention to a truism , also called common sense, “the road to hell is often paved with good intentions”. You do realize that your very actions ensured that these bigots received more publicity than they could have ever dared hope for."

Hopefully, the local Gordon Gilchrist screamers and whiners will realize the greater consequences of their censorious actions, and instead of calling for odious voices to be censored, take the FREE SPEECH road to make arguement against those voices they find disagreeable.
Posted by Wally Keeler at 8:27 AM No comments:

From the same neighbourhood (Corktown) in Cobourg where the lilly-white whiners demonize the off-white VISITORS.
Posted by Wally Keeler at 12:38 PM No comments: 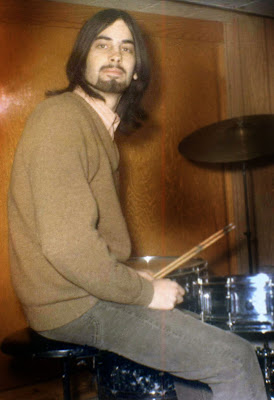 Born September 9, 1950, friends remember him as a drummer in a local band, but especially as the handsome and lithesome athelete who wore white shorts. Robert, a student at Cobourg District Collegiate Institute, West, had won several awards for outstanding athletic feats. Those close to Younger know his famous story of swimming the Rio Grande. 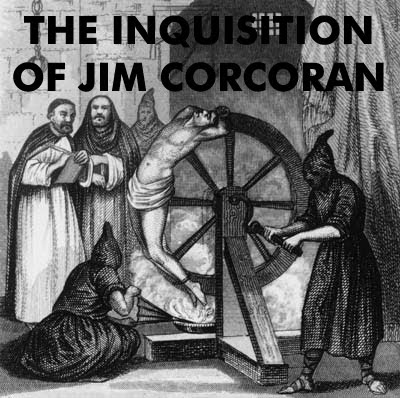 “This past week was a little stressful as one of the respondents to the HRC case decided to use his office and all of the Catholic Churches in the Peterborough diocese to establish his authority, and my guilt, and to spread his version of recent events that is substantially different than what I perceive the facts to be (sound familiar?).”

Visit Jim’s Blog and click on the phrase “(sound familiar)” and it will take you to a web site describing the infamous Inquisition. So poor widdle Jimmy feels absolutely persecuted and tormented and being prepared for torture and execution by the evil powers of the Roman Catholic Church. That’s what the Inquisition was all about back in the dark ages. Jim Corcoran wants everyone to be convinced that this is what he is currently feeling. This is a man without a sense of proportion.

Jim Corcoran, recall, laid Ontario Human Rights charges against 12 parishioners and the local Bishop. Corcoran’s very public complaint against the Bishop was very detailed, extensive and thorough. How dare the Bishop respond ("spread his version of recent events") to Corcoran’s charges in public and to do so as the Bishop.

What planet of injustice is Corcoran living on?

People complaining against others via the Human Rights bureaucrazy, do not have to risk their financial livelihood. If Corcoran loses his case, he doesn’t have to pay court expenses, as is the case in civil courts, real courts, not tribunals. The taxpayers are picking up the tab for a human rights case about gay discrimination, that Corcoran himself has admitted is not the “central point.”

If there is an Inquisition here, it is coming from Corcoran and his merry band of politically correct inquisitors, the ones who swarmed Gordon Gilchrist in the recent past, now swarm around Corcoran chanting, “more power to the state.”
Posted by Wally Keeler at 10:16 AM 11 comments:

THE BLONDE BITCHES OF BLAKE 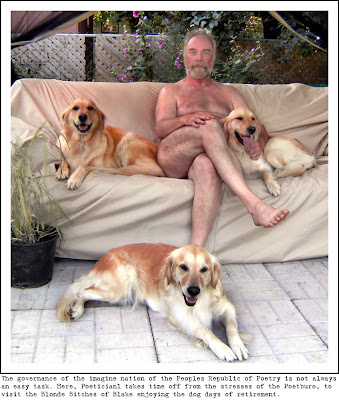 THE BLONDE BITCHES OF BLAKE

Ten years ago, a ménage a trois of bitches became renown throughout the imagine nation of the Peoples Republic of Poetry for saving 20,000 annotated anthologies of William Blake’s Collected Poetry from a fate worse than mediocrity.

In the heat of Word War 738, the main library of Poempeii had suffered a major airstrike from Bland Land and collapsed. Bills of lading indicated that the platinum-printed Blake anthologies had been delivered the day prior to the strike. The anthologies were nowhere to be found in the lightly-damaged shipping & receiving depot of the library. No other evidence was available to indicate the location of the books in the vast complex of the library, so Honey, Sugar and Ginger were called in.

The collapsed library was fragile and perilous. This fine family of bitches consisting of a mother and two daughters, were undeterred and sniffed out the precise location amid the rubble. Their sense of scent was so highly developed that the bitches needed only a single line of “Tyger, tyger burning bright, In the forests of the night” to trace the whereabouts of Blake’s glorious illuminations. A brigade of Virility Verb Volunteers from the National Bard excavated the area and rescued the buried anthologies not ten minutes before the ground gave in, swallowing high literature in a single belch of banality.

Throughout the imagine nation, the poetariet celebrated; units of verse of the unitverse gathered in a Million Muse March to pressure the Poetburo to designate the trio as the Blonde Bitches of Blake. The following year later the bitches were promoted to the honoured poetsition of providing escort services for visiting artist dignitaries from other creative sectors of the imagine nation. The bitches began their careers in Poettsburgh, Poemsylvania distinguishing the distinctive scents of ubiquitous free verse, the boozy breath of limericks, the delicate fragrances of rhyme schemantras and the brittle odour of aging sonnets. Their tight familial bond provides a visceral collaboration that transcends all previous pack conjunctives.

They achieved the highest level of success for the Lost and Profound Dep’t of the Poetection Agency of Poempeii where they had been employed for the first half of their career. There are numerous instances each year of poetry and portions of poetry being windnapped out of a child’s careless hands. Random breezes will swipe a first draft rhyme, as easily as a fully developed sonnet.

Poettsburgh authorities released incident reports for 2008 revealing that 16 limericks, 4 quatrains, 2 rhyming couplets, and an entire sonnet had been swept away by wind. The Blonde Bitches of Blake were known to be able to follow the traces of imagination regardless of where the poems had been flung by intransigent gusts.

The bitches also served in the Sub-verse Dept for a handful of years. This is an odious but necessary service for the imagine nation – the search and seizure of doggerel from the pulp friction industry.

Posted by Wally Keeler at 12:51 PM No comments: